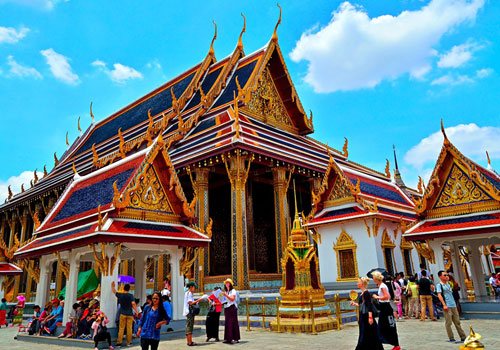 Thais are a fun-loving, polite and easy-going people. Majority of the Thai people understand that foreigners have their own cultural background and way of doing things. They are known for their hospitality and cheerfulness. As with all cultures, however, there are certain simple rules to be observed to avoid embarrassment and misunderstanding so that you can enjoy your stay in the kingdom.

Thais regard the monarchy with the utmost respect and deep feeling of love, and are disturbed by any slights against them, even if meant in jest. Negative remarks about the monarchy, vandalizing, damaging or destroying any images, monuments or statues of the King or any of the Royal Family is not only an offense to Thai people but may be considered lese majeste, an offense carrying severe punishment in Thailand.

The majority of Thais are Buddhists of the Theravada sect. Muslims are the second largest religious group at about five percent. The three southernmost provinces of Thailand are the only Muslim-majority parts of the country. Christians, mainly Catholics, represent less than one percent of the population. Small but influential communities of Sikhs and Hindus live in the cities and are heavily engaged in a wide variety of businesses. There is also a small Jewish community in Thailand, dating back to the 17th century.

Therefore, it is really important to always be respectful towards people of all religions. When visiting a religious temple or shrine, make sure to dress appropriately with long trousers or skirts, and long sleeves. Remove your shoes when entering temples and shrines. Never disrespect the image of the Buddha because it is considered very sacred. Be very respectful when you come across Thai monks. They are not allowed to touch or be touched by women, and if a woman needs to hand something to a monk, this must be done through a male third party.

Thailand is a non-confrontational society, and to show anger or impatience or to raise your voice is a sign of weakness and lack of control, and causes great embarrassment. Patience, humour and a pleasant smile will work wonders.

In Bangkok and other major tourist destinations, travelers feel free to wear whatever pleases them, and locals are accustomed to the presence of foreigners. For a temple or palace visit, however, wear tops with sleeves, pants, skirts or dresses that cover your knees, and closed shoes. These places also have scarves and sarongs to put over your clothes. More and more high-end restaurants and bars, especially those in hotels, have dress codes. It is advisable to check with them before going.

Revealing clothing, worn by either men or women, is regarded as embarrassing. Short shorts, low cut dresses and skimpy bathing suits come into this category. A clean and conservative appearance is absolutely necessary when dealing with border officials, customs clerks, local police, and bureaucrats.

The head is the most sacred part of the body, so it should not be touched. The feet are the least sacred, so when sitting they should not point at anyone. The placing of feet on tables or desks is considered extremely rude. The left hand is regarded as unclean and should not be used when handling food or giving and receiving items and gifts. 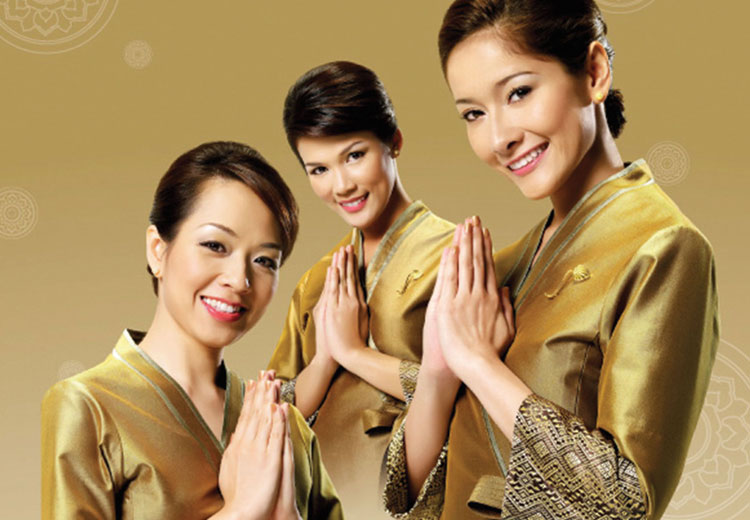 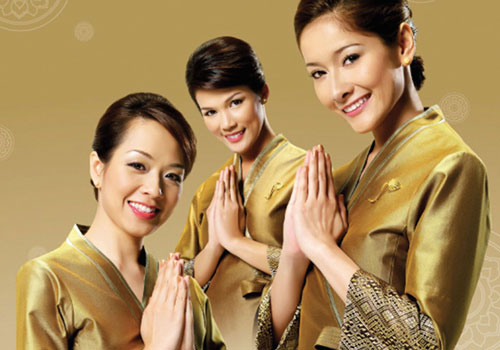 An important part of Thai culture is about being respectful and polite to one another at all times. One simple way that visitors to Thailand can show respect to Thai people is by learning the traditional hand gesture for greeting and thanking. This gesture is called the ‘wai’ (pronounced like ‘why’). The hands are placed together as in prayer, and raised upwards towards the face, while the head is lowered in a slight bow. The height to which the hands should be raised depends on the status of the person you are waiing. In the case of monks, dignitaries and elderly people the hands are raised to the bridge of the nose, with equals only as far as the chest. There is no need to wai young people, a slight nod sufficing. Thais do not expect foreigners to do the wai but it is a respectful and courteous thing to do in different situations.