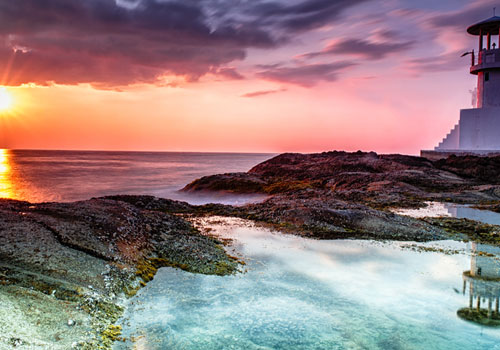 For many vacationers in Thailand, the island of Phuket, with its massive resort towns, is a bit too overcrowded and busy. As a result, neighbouring Khao Lak, with its long stretches of white sand backed by forested hills, is a welcome alternative. Here the warm waves make for a great day at the beach, and speedboat trips to the Similan and Surin Islands, as well as Khao Sok and Khao Lak/Lam Ru National Parks, are easily undertaken. In addition, five star accommodations are available all along these stunning beachfronts.

Khao Lak is a 20 km long strip of coastal resorts in Phang Nga Province on the Andaman Sea, located about 100 km north of Phuket Town. It is made up of a series of villages, located mainly in the Takua Pa District and partly in the Thai Mueang District of Thailand’s Phang Nga Province. The name “Khao Lak” literally means “Lak mountain”, and refers to the main 1,050m peak in this hilly region within Khao Lak-Lam Ru National Park. The tiny village of Ban Khao Lak (the original beach), Hat Khao Lak, the bay of Khao Lak, and sometimes even the northern town of Takua Pa, make up the area generally referred to in travel literature as greater Khao Lak. About 2.5km north of Hat Khao Lak you’ll find Hat Bang Niang, an even quieter version of sandy bliss with skinnier beaches and fewer people. Meanwhile Khao Lak proper - also called Khao Lak Town by locals - is a hodgepodge of local restaurants and interesting, lively tourist markets. Daytime outdoor activities include hiking, elephant trekking, bamboo rafting, and a visit to either the Kapong or Ban Bo Dan hot springs. Travellers can also spend a somber moment visiting the International Tsunami Museum, which commemorates the 2004 tsunami disaster.

Khao Lak is approximately 60km north of the island of Phuket, accessible via Phetkasem Road, (Thai Route 4), one of four major highways in Thailand. Arriving via the Phuket International Airport (HKT) is the most common mode of access for travellers from Bangkok. Alternatively one can drive directly from Bangkok, and the 750km trip along Highway 4 takes approximately 11 to 12 hours.