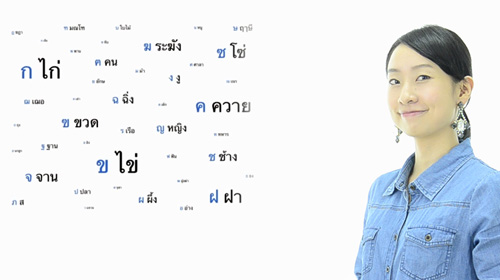 The official language of Thailand is the Thai language, which is widely spoken throughout the nation. However many Thais are also able to communicate in English, particularly in the major cities, Bangkok, Chiang Mai, Phuket as well as areas that are widely visited by foreign nationals. Other European and Asian languages are spoken to a lesser degree but limited to areas frequented by these visitors respectively.

Mastering the Thai language is a challenging task because it is considerably different from many foreign languages but Thai people are happy to help foreigners learn a few words to help them get around. The Thai language features five tones: high, mid, low, rising, and falling, each of which changes the meaning of particular ‘words’. Visitors unfamiliar with tonal languages often have difficulty pronouncing even the most basic terms when learning to speak Thai.

Written Thai is based on an alphabet adopted from the Khmers and is believed to be standardized during the Sukhothai period. The Thai alphabet consists of 44 consonants, 18 vowels, and 4 diphthong (tonal) notations. Learning to read Thai can be even more complicated than learning to speak it as the pronunciation of written words does not follow a straightforward progression of letters and written Thai does not place spaces in between words.

Fortunately, road signs are written in both Thai and English, and many tourist areas provide maps, menus, and other literature in both Thai and various other foreign languages. One problem that does occur for foreigners trying to pronounce Thai words correctly is caused by the transliteration of Thai words into Romanized characters. An obvious example would be the island of Phuket, pronounced “poo-ket” rather than “foo-ket” as it would be pronounced in English. Furthermore, there is no official standard for the transliteration of words and thus many Thai words are spelled differently on different maps or street signs. In addition, while most Thai’s speak and understand the central Thai dialect, there are various regional dialects, including those of Southern Thailand and Northeastern Thailand, the latter of which is essentially just the Lao language (as most of the population is of Lao descent). In northern Thailand, which had been the independent kingdoms of Lan Na and Chiang Mai from 1259-1939, a distinctive form of Thai is still spoken by the local inhabitants, all of whom can also speak central Thai. All variants of Thai use the same alphabet.

However, English is typically the common currency for cross-cultural conversation as Thailand hosts visitors from around the world.

***For politeness, add ka at the end of your requests and sentences if you’re female and krub if you’re male.